Mabamba is an extensive marsh stretching through a long narrow bay, fringed with papyrus Cyperus papyrus towards the main body of Lake Victoria. Miscanthus and Cyperusspecies dominate, but there is a narrow open water channel and a small patch of water-lilies Nymphaea. There are also areas of sedge Cladium, and sometimes drifting papyrus swamp islands. The Bay forms part of Waiya Bay, south-west of Nakiwogo Bay; these are all to the west of Entebbe International Airport. This Important Bird Area (IBA) is one of the best marshy areas along the northern shores of Lake Victoria.

This is the closest place to Kampala where Balaeniceps rex are regularly seen. The surrounding communities have reported breeding, and the young are sometimes collected by local people to be raised and eventually sold. Balaeniceps rex feeds primarily on lungfish Protopterus aethiopicus, which is also prized by the local community. Balaeniceps rex is regularly recorded in pairs and threes in the marsh at Nakiwogo, c.2 km north-east of Mabamba Bay. Recent visits also confirmed the presence of flocks of other species, especially migrants such as Sterna nilotica, Chlidonias leucopterus and Chlidonias hybridus and residents such as Larus cirrocephalus. Other notable species found in the marsh include good numbers of Ardea goliath, Plectropterus gambensis and Nettapus auritus, and a number of migratory waders. The site may be important for Hirundo atrocaerulea, and there are old records of the globally near-threatened Circus macrourus.

Like many papyrus swamps adjacent to Lake Victoria, Mabamba contains the ungulate Tragelaphus spekii which is commonly hunted by local people.

Mabamba bay hosts a number of small rodents but Otomys tropicalis has been recorded as being rare in the Bay. Among the shrews Crocidura selina and Mylomys dybowskii have also been recorded as being uncommon. The collection of butterflies from Mabamba bay is enormous with over 200 species recorded. Abisara neavei, Acraea aganice, Acraea aurivilli, Acraea consanquinea, and Bicyclus sebetus are some of the very rare butterfly species that have been only recorded in Mabamba Bay. The system hosts globally threatened bird species for example the Shoebill (Balaeniceps rex), Papyrus Gonolek (Laniarius mufumbiri), Pallid Harrier (Circus macrourus), Blue Swallow (Hirundo atrocaaerulea), Gull-billed Terns (Gelochelidon nilotica), Whiskered Terns (Chlidonias hybridus) and white Winged Black Terns (Chlidonias leucopterus). Over 190 different bird species are known from the swamp, among which are wetland-dependent and Papyrus endemic species. 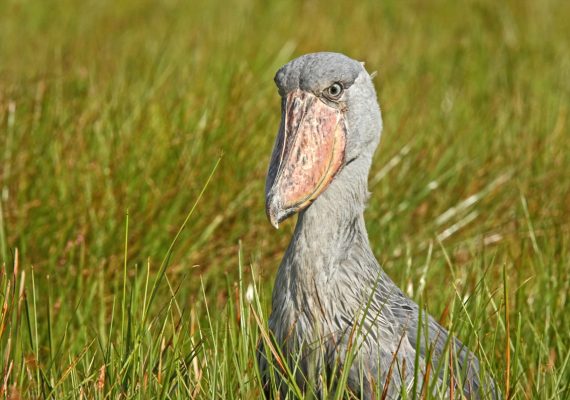